I’ve mostly had COVID – but have finally started some sewing again.

I’ve also made a Caramiya pattern that as of this taping is no longer expected to be released. That one used French seams, and has a full enclosed & exposed facing.

The test for PaperAnchor included a bound hem.

I’m hoping to get some binding made today so I can do Hong Kong seams on my sheer Half Bog dress – a newly released pattern by TheSewSew.  I’m making a Pepite Stitcher Pothos unitard to wear underneath it.  I can’t recall where I saw this idea – but someone on Instagram did the same with a sheer dress.  I’m getting the Pothos pattern printed on the new tissue paper from The Plotted Pattern company.

Elizabeth Suzann Clyde Jumpsuit – made a toile from an old sheet and then made one with a really nice canvas from Domesticity – a local sewing store here in Baltimore.

Elizabeth Suzann Florence shorts – made in a heavy linen – waist too high.  Everything I make from her is too high, because I use the tall version- mostly tall in legs, not torso. Linen from Fabrics-store.com

Elizabeth Suzann Clyde pants – this is my true #pfBondage project.  I used Brussels Washer Linen from Robert Kaufman and did flat felled seams throughout.  I used the tip from Sheila O’Kelly and bias bound the bottom of my waistband, serging the first pass.  LOVE how these pants came out.  Loved them so much that I redid the waistband in an old pair that needed the elastic redone.

Made a pair of pajama pants for Jim for Valentine’s Day.  I used quilting cotton with scientists and science stuff on it that I got from Domesticity for just $2/yard! I used the FREE pattern from 5 out of 4 patterns for pajama pants (max 65” hip) as a starting point, but put some nice pockets in it (similar to in the Hudson pants (slash pockets?). – He really wanted a shirt made from the fabric so I got some more of the fabric and will make it this weekend.

Finally I made two Georgia Tee patterns, also from Elizabeth Suzann.  The first is a toile in scratchy cheap linen and the second is in purple silky noil.  I love it so much!  Such a simple pattern, so perfect for #pfBondage because there are just a few seams.  Excellent beginner project that looks really cool.  I love it because it’s short enough for skirts without being tucked in, and not so short that i don’t want to lift my arms.

Fibremood 18 is out! I think the cover pattern is my favorite.  It’s the Paola Sweater and I think it will work for me because the sleeve detail isn’t at the shoulder. 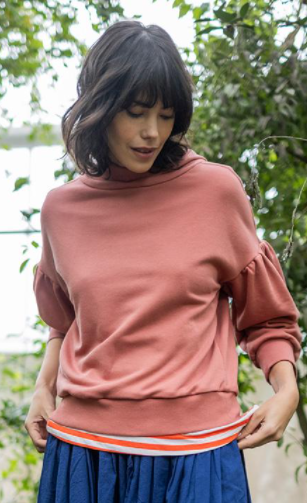 Is it a hoodie or not? That’s up to you! Paola looks great with or without a hood and is just the ticket with or without a kangaroo pocket. Either way, you’re the boss. You could also make the sleeves three-quarter length or longer. Or maybe you’re already tempted to sew a pair of Paolas in one go! One thing’s for sure, though – the stretch trim fabric makes for a supremely comfortable fit and keeps your head snug and warm.

Calls for knit fabrics and I think I need to get some more of my favorite french terry from Stylemaker fabrics. 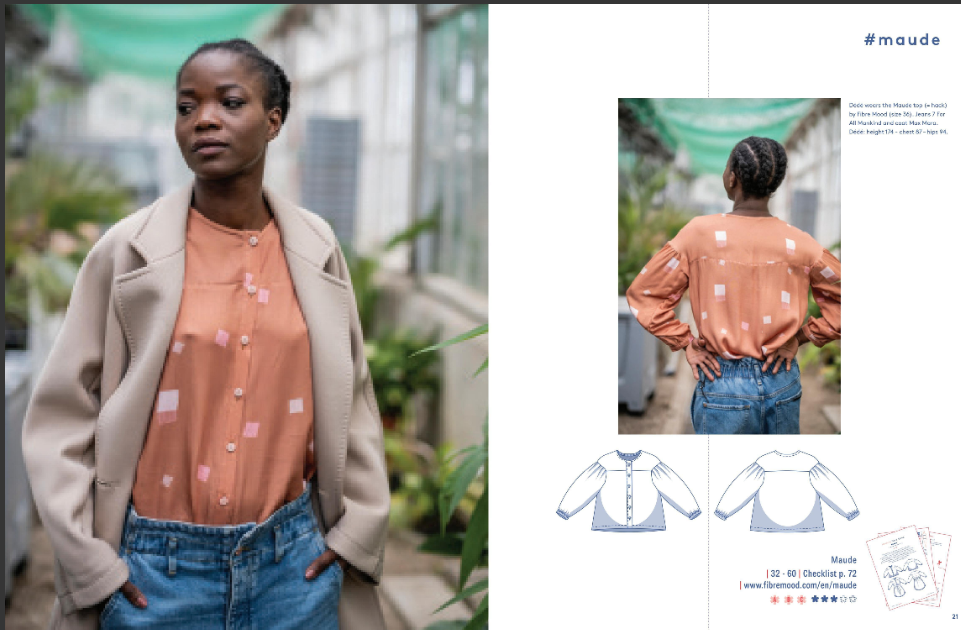 Four patterns: pants, jumpsuit, coat and dress.  Two size blocks range from hips 35 inches to 67 inches.  “Daughter Judy is a design driven pattern collection whose mission is to infuse intention into personal style with quality drafted patterns for the home sewer. Modern classics with a point of view allow users to curate lifelong style into their closet. Wear them to be heard or relaxed and off duty. There is extensive experience behind every Daughter Judy pattern–we’ve done more testing so you can spend less time adjusting.” Founder got her start at Ralph Lauren. 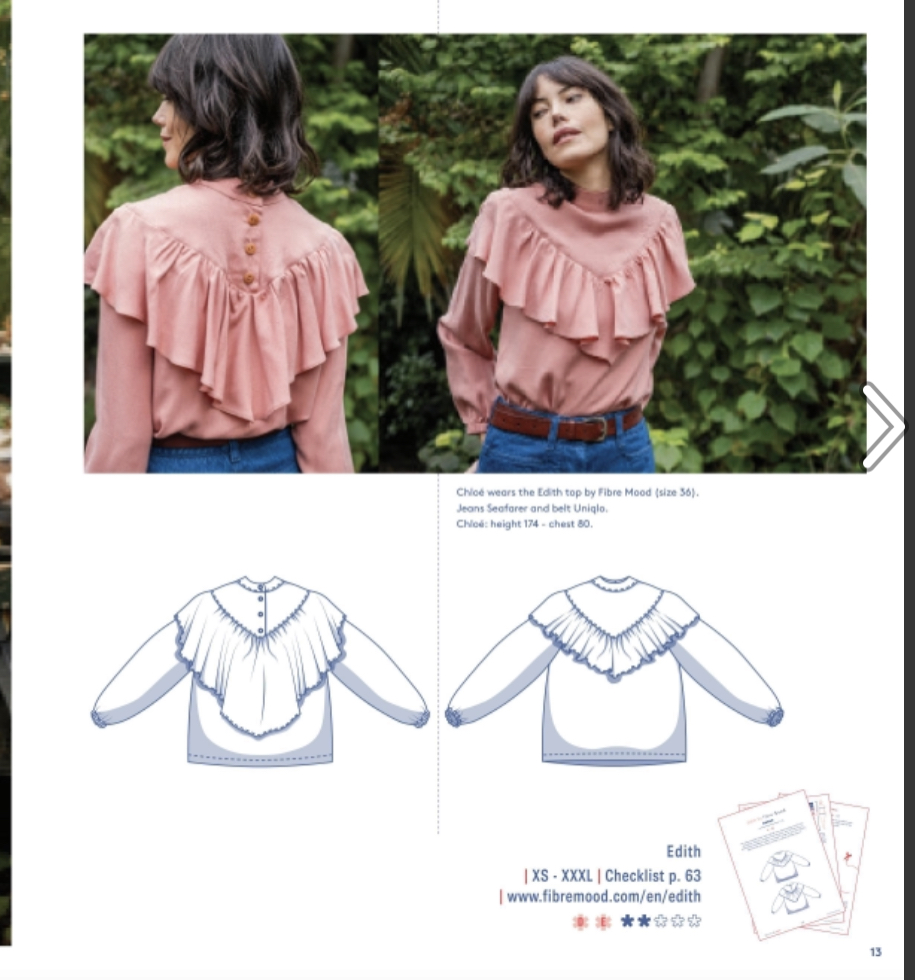 pfBondage/#pfBoundSeams/#pfSeamFinishes – Let’s do three each this time 🙂

Cotton_and_seed_handmade: also made another pair of MB Birchgrove pants with similar detail.  Beautiful!

Karenspurplecow: montrose top by Cashmerette.  Finished the neckline with ruched self-fabric binding, covering up an undesirable result.  Want to also call them out because they mentioned that they are only posting about patterns that meet their standards for size inclusivity. Wonderful to see folks in the sewing community being thoughtful about this.

Bellecityhandmade: Love this because she noted this was her SUBMISSION for #pfBondage-used french seams

This month’s Sponsors are:

Thanks for the shout-out! & yes, Jenny, you got my name right! Very impressive! First & last name rhyme, last name starts with a bit of a Z sound.

That is so cool! Is it your given or married last name?

It’s kinda like my pen name, but it’s also my legal name. Ciara is the name I was born with, & I had a different last name. I just made up the last name Xyerra as a hilarious misspelling of my first name (before Ciara the pop singer came along, NO ONE could spell or pronounce my first name properly, EVER), & I started using Ciara Xyerra for writing zines when I was 20, & then I legally changed it when I was 25…not really thinking through the ramifications of going through life with a completely made-up rhyming name. But it’s been almost 20 years now, no going back. Even my daughter’s last name is Xyerra, poor kid, haha.

Even better! Chosen by you.