Helen’s Closet Code for a pattern

Thanks for rating & reviewing us. Have a tip to share? Include it in your review & we’ll read it on a future episode!

Cashmerette Club pattern: Gilmore Skirt in IKEA vintage canvas  Is it too early for this to be #pfTNT?

Cashmerette Club pattern: As yet unreleased – can’t wait to show you this colorblocked amazingness

Trillium Dress: from Made by Rae. Quilting fabric by Ruby Star.  Facing on the outside, contrast color, with added pompon trim.  IT’S TOTALLY LOVE.  #pfTNT

I’ve not made much else, but have a lot cut out and ready to go.  I’m hoping to sew a lot this weekend.

I did order the Ashton top from Helen’s Closet and have plans for a dress.  In addition, I have another Trillium on the cutting table – this time from one of our sponsor’s this month, Seams Fabric.  I’ll be using a yarn dyed fabric they provided to make this version.  I’m still searching for the right trims to use with it – stay tuned.

I think I’ll make some more TNTs for me this month too:  Sagebrush, Chive, etc.

I completed my first #pfTNT project!  I made my beloved Sew House Seven Free Range Slacks as shorts.  I used Fabric-store.com softened 4C22 (heavy weight) linen, in the Auburn colorway

I think that weight/finish of fabric would be good for lots of projects requiring bottom-weight fabric.

I made my first Closet Core Kalle Shirt Dress using Brussels Washer Linen, ocean colorway. I LOVE this pattern. I have another one cut out and mostly finished using the Ruby Star Society Speckled fabric (108” wide) in Navy, that I purchased from Domesticity, here in Baltimore. 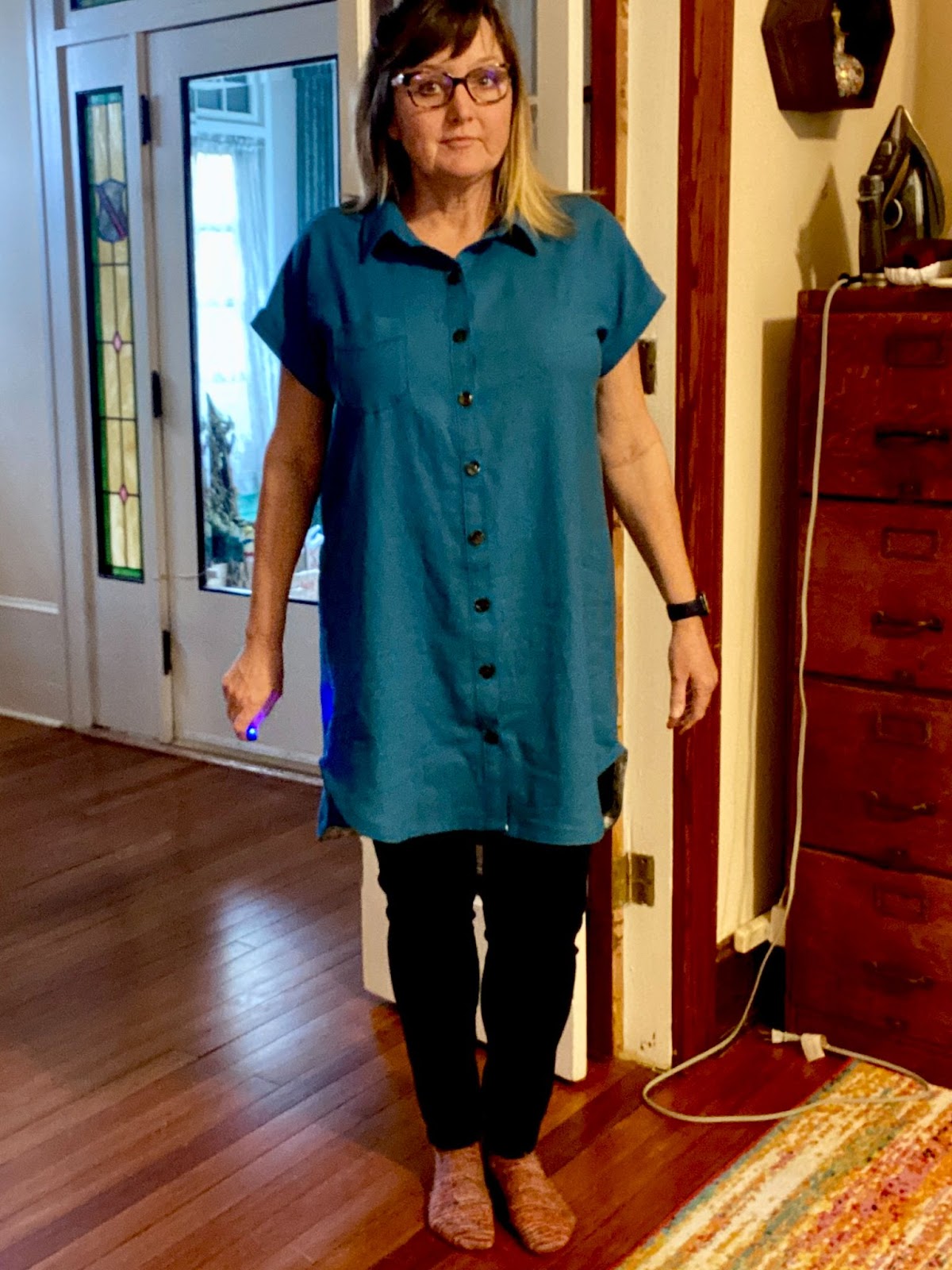 How many do I have to make before it is a TNT???

I suppose it counts because it is a community TNT, but how many do you need to make before you consider a pattern TNT? I was wondering the same thing.  My Gilmore skirts will be TNT – I’m sure of it.  But I probably won’t have made more than a handful by the time the month is over.

First – I DM’s Tauko on IG to ask their naming protocol for pattern hashtags. They don’t have one and I suggested #tauko-nameofpattern – and they are going to talk about doing it!  Yay!

The first pattern I am drawn to is called SWING, and it’s very much a me pattern and not so much a Jenny pattern. Loose bodice, pleated skirt – sample is made in checked Merchant and MIlls linen – I think almost the exact same that Jenny bought me from Domesticity, only mine is pink/white.  The only thing I’m not as excited about is I think I already own very similar patterns – Sew Liberated Hinterland, the Merchant and Mills Ellis and Hattie dress (large size band small size band  is very similar and I think I like it better. 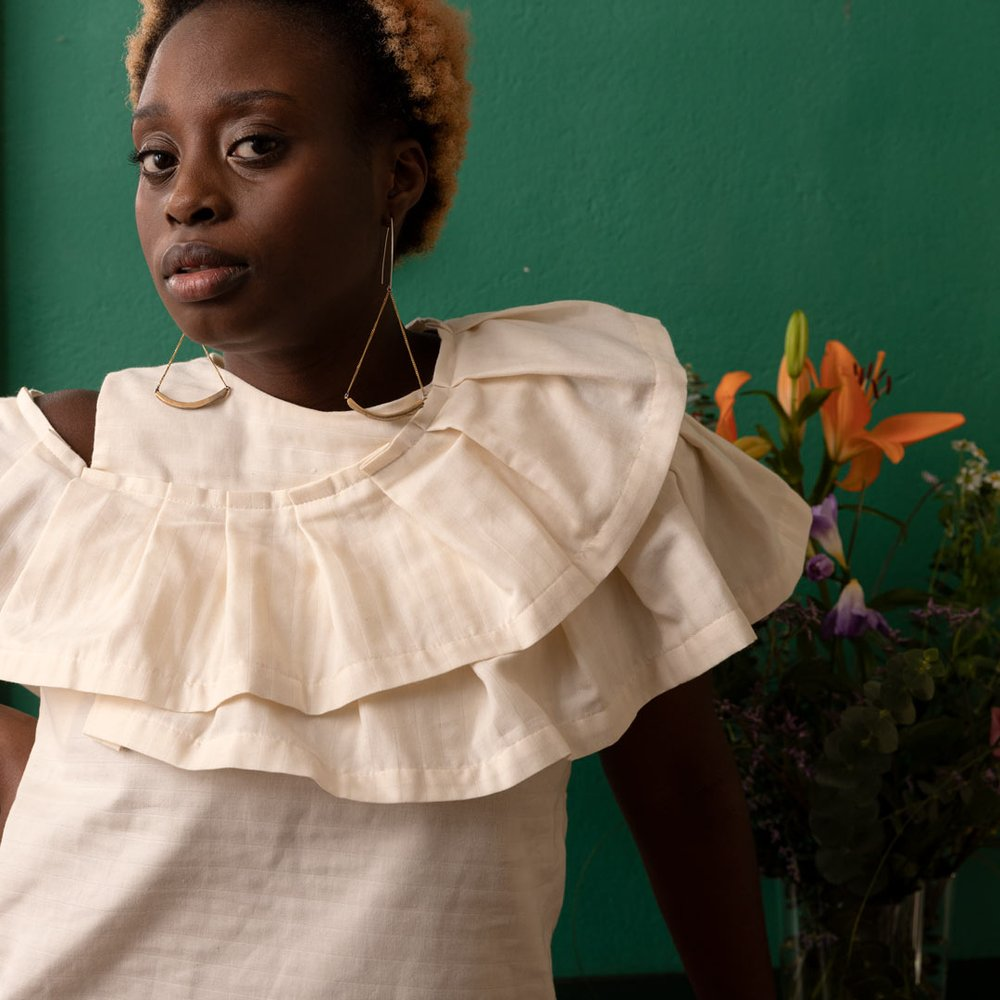 The next one is called VIOLET and it is a really interesting design.

“The off-the-shoulder sleeves are created by making irregular knife pleats around the arm, and they’re the highlight of the design. The garment is constructed using an A-line base dress or a top that fits various body types.”

I love this and hope it’s available as a PDF pattern; I do not care to trace patterns, so this is my only path to it.  It’s super cute and I’d make an amazing dress out of it – of course! 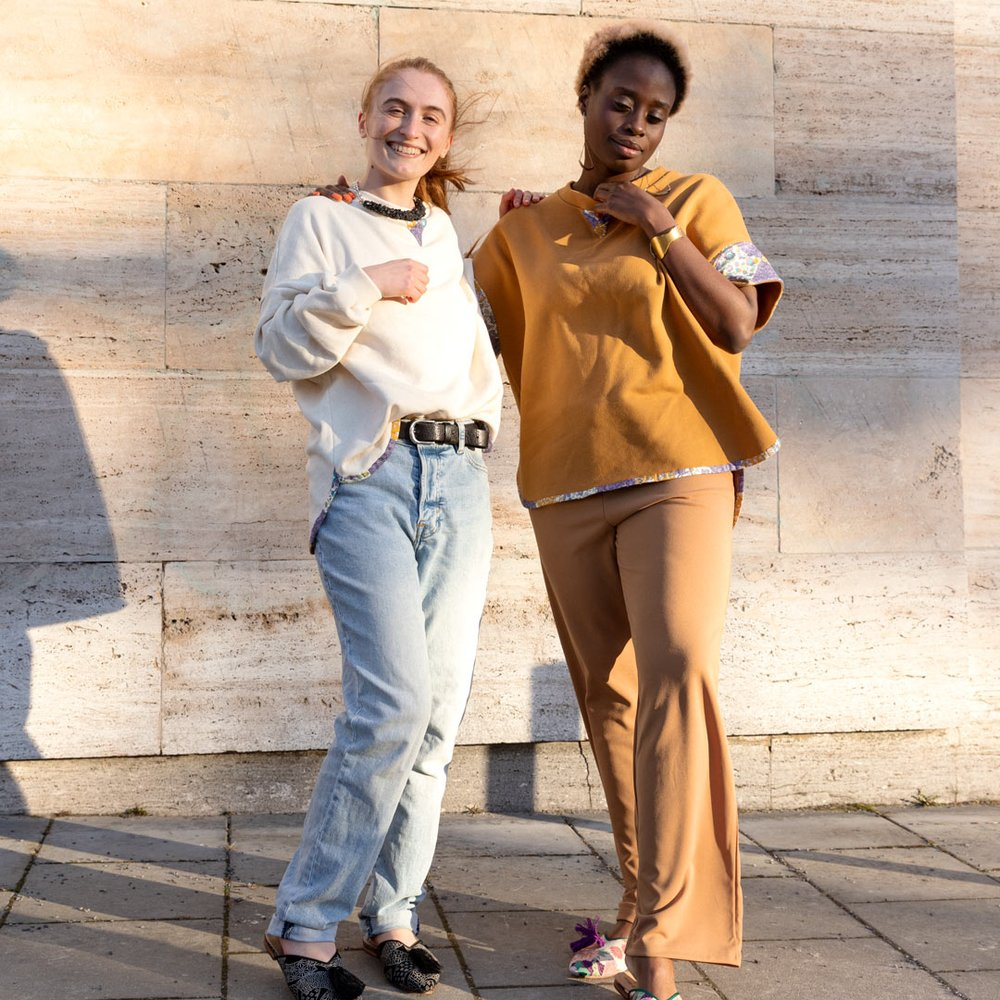 The next one I like this the MALLOW, can be made as a long sleeved sweater or a short sleeved tee.

“When designing the MALLOW sweater, Gaëlle wanted to create a cosy and accessible design, fitting for a large range of bodies – with a vintage twist. The patchwork details are a nod to the romantic imagery of the 1970s captured by the photographer Sarah moon. You can make the MALLOW sweater in two variations: long- sleeved and T-shirt-sleeved.”

Looks like bias binding on the bottom. Do I spy a little inverted triangle at the top, like on a RTW sweatshirt?

Both samples made in french terry.

The HELMI blouse draws from Victorian- inspired style influences. It’s a demure, understated take on the ruffles and ornamentation that define the style, but with enough flourish to catch the eye. Choose a Peter Pan collar or a stand collar and customize the level of frill you want to suit your style! If you’d like to add more detail to the Peter Pan collar, try adding trims to the seam at the collar’s edge. 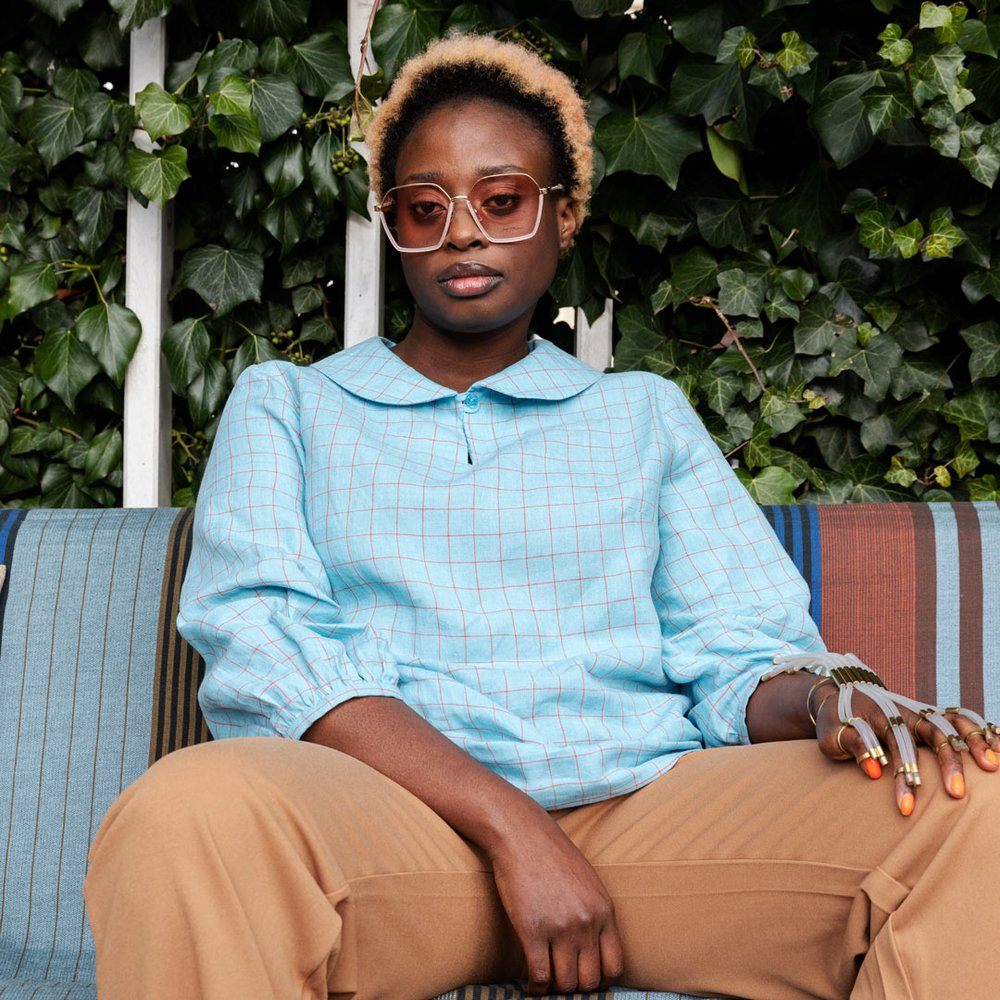 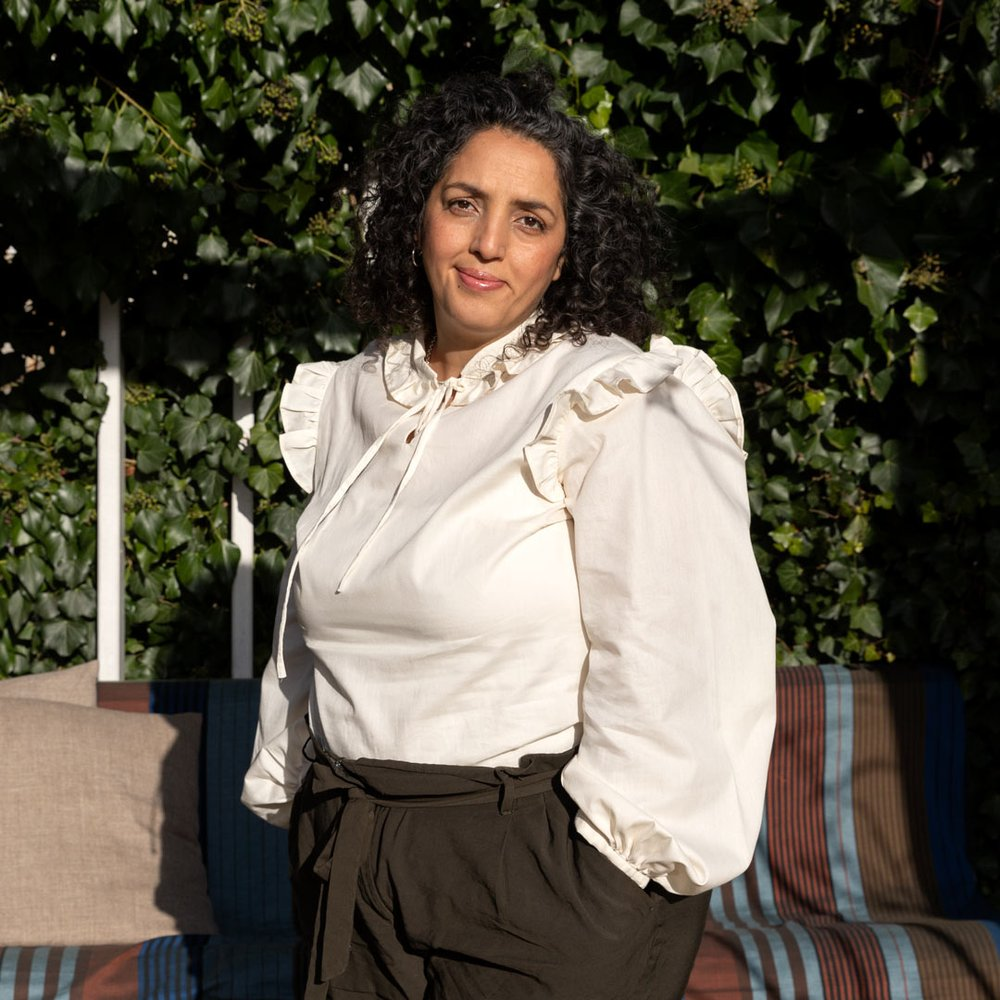 This one is also Helmi but with different sleeves and collar. I prefer above.

The sleeves are outrageous in the best possible way!  I prefer the Peter Pan collar; again my barrier to entry is having to trace the patterns.  Fingers crossed for a PDF version of this one.  I’d subscribe in a heart beat if that was available for every pattern, every issue (like Fibremood).

One final one I like is called the UNIFORM.  It reminds me of the type of long tunics that Indian men wear.  It is a plain dress, just below the knee with about 12” slits on the sides.  There is a popover placket that goes down about 12 inches from the top. 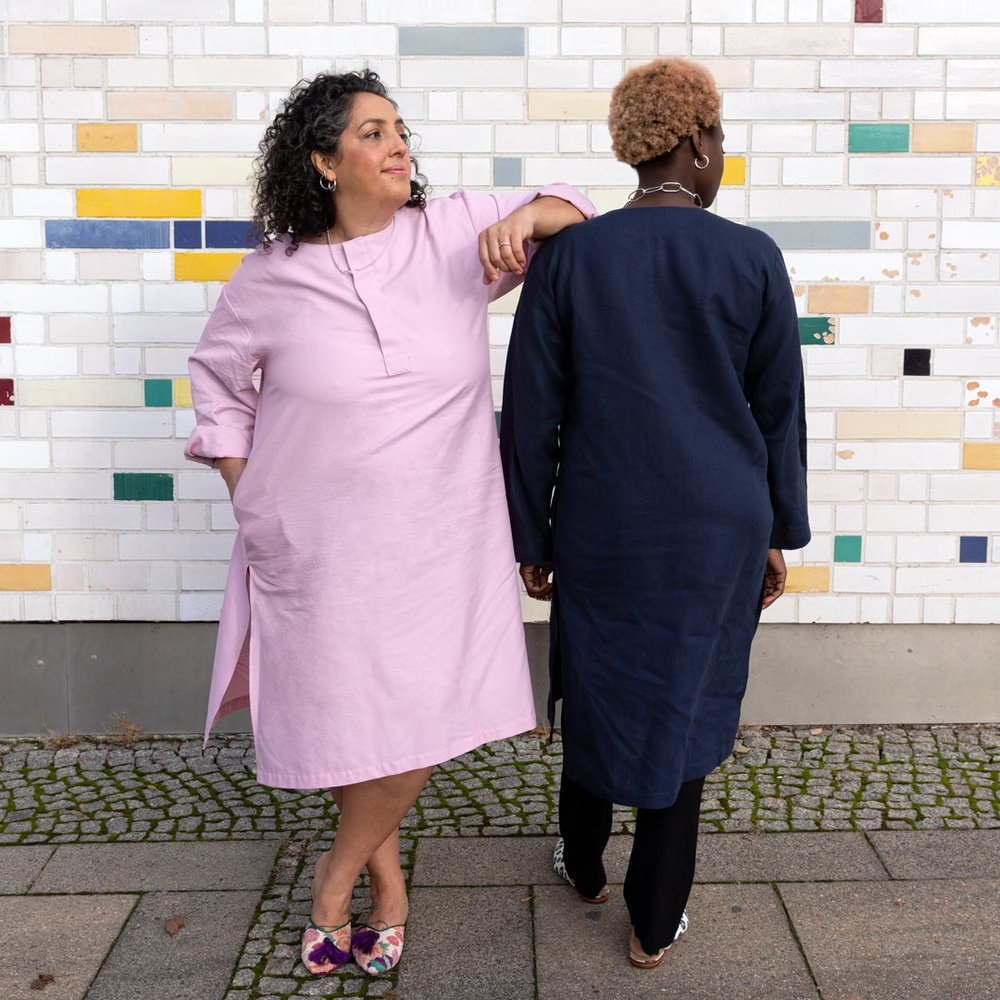 I like the possibility I see in Melisse.  The high slit, the crossed back.  I’m interested to see the line art to understand if it’s right for me.

This dress has a drawstring waist, very high front lit, mid-calf skirt, with cross over, very open back.  It’s not hide-your-bra friendly, but seems lovely for an outfit where that’s something you embrace, or over a swimsuit this summer.

Grace dress by Patterns for Pirates

Not here yet, but I’m already looking forward to it:

#pfTNT recipes – since we put out a little joke for April Fool’s day about starting a new slow cooking podcast, we thought we would give folks a couple of our Tried and True recipes

Beverly: For a slow cooker – definitely my black bean soup.  You start with dry beans that cook on HIGH all day in just water.  Then you saute up some veggies and seasoning and add it to the beans. Very tried and very true.  REcipe in show notes.

From the kitchen of Beverly Baptiste, Serves 10

Juice of one lime

Put washed beans into crockpot without soaking. Add water and cook on high for 7-8 hours.(Depending on your desired consistency, you can remove some water from the beans) Saute vegetables in some oil until softened to your liking. Add to crockpot with remaining ingredients. Serve on its own, or over brown rice. Delicious garnishes: sour cream, cilantro, cheddar cheese, salsa.

Next is one of my current faves – Linguine and Clams!  I love this NY Times recipe, but I have tried several that I love.  The one thing I like to add is fresh clams, but that’s mostly to be fancy.

My TNT recipe isn’t for the slow cooker, but it’s worth the time/effort required.

I learned to make this at the start of the pandemic and it’s a favorite whenever the steak is on sale.  I don’t like mustard excepting on hamburgers & hotdogs, but love it here.  And I don’t generally do mushrooms but this convinced me they might be worthwhile.  So give it a go!